You are here: Home / Blog / A Cluster of SpiderWomen 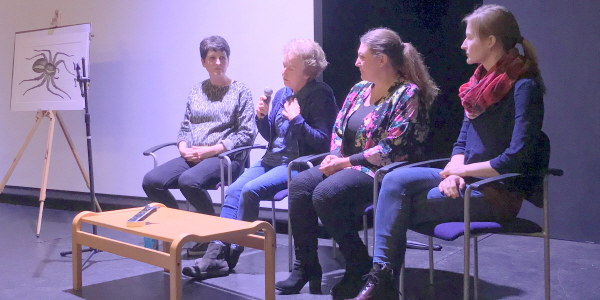 The spider’s reputation has been redeemed in an absorbing portrayal of their interaction with humans at Waveney & Blyth Arts’ Thrilling Thursday event (6 December 2018).

Four artists and scientists came together at The Cut, Halesworth to explore different aspects of the lives of spiders and our fascinating relationship with them.

Helen Smith lured us in with her compelling narrative on the Raft Spider, Dolomedes plantarius. A wetland specialist, the raft spider had all but disappeared from this country remaining in only three areas – Redgrave and Lopham Fen, Pevensey Levels and Crymlyn Bog. Helen introduced us first of all to the structure and life of spiders showing us the amazing variety of species. They wear their skeleton on the outside and so need to shed it every so often as they grow.

Dolomedes is an ambush hunter, resting suspended over a pool of water, its front feet picking up vibrations from prey that moves below, even taking small sticklebacks.

The male spider can follow a ‘drag line’ to locate the female. Once impregnated, the female creates an egg sac, spinning a protective silken coat around the 700 eggs. The sac, like an enormous football on which she balances, dwarfed by it, turns grey on contact with water. After three weeks she punches holes in the silk and lets the spiderlings out, building a sheltering nursery in which they spend another five days.

Artist Sheila Tilmouth, was granted an Arts Council residency to work alongside Helen.  Using oil painting, linocut, etching and photography, Sheila captured the intimate detail of the raft spider’s life in a comprehensive portfolio of work. Sheila was unable to join the team of Spiderwomen but her artwork was displayed at the venue and incorporated in Helen’s talk.

The collaboration between Helen and Sheila exemplifies the importance of cross-disciplinary work between scientist and artist. An important outcome of Helen’s work is the increase in the raft spider population following both a breeding and reintroduction programme, but also the creation of a more understanding approach to land management. For more about Helen and Sheila’s work track down their book: On The Margins – the fen raft spiders of Redgrave and Lopham Fen (Langford Press 2014)

From the life of one Spider species, we focused down on the structure of silk. Nicola Stehling, from University of Sheffield, described her research into the seven different silk types produced by spiders. All silk is formed from structural proteins spun into fibres for use outside the body. Scientists like to study the orb spiders because of the very strong webs they produce but because British spiders tend to be on the small side, Nicola studies tropical spiders.

An electron microscope is used to look within the silk thread structure. Kevlar, the material used to make bullet-proof vests, has the same molecular structure as spider silk but its production uses all sorts of hazardous chemicals and processes. How can spiders produce such strong material using only water as a solvent? Nicola’s research, known as biomimicry, tries to understand the way in which the natural world provides solutions to problems which can be useful in our own industries.

The properties of silk were explored further by artist Eleanor Morgan, whose fascination for spider silk began in a Canadian basement, where she collected spiders’ webs to weave on a hand loom. Eleanor described the long history of humans using spider silk as a fibre for material. From the 1700s when it was first realised that a spider thread could provide the lines within telescopes and gun sights, to the Madagascan spider silk industry where spider silk was collected on bamboo frames.

The Golden Orb Spider spins silk which was used to create the thread for a spectacular golden cloak. The colour of the silk changes according to the light levels and this is reflected in the cloak, the thread becoming silver in low light.

Stories of the use of spider silk come from different cultural traditions across the world, often linked to the cycle of life and death. Were the spiders’ web hoods really used as smothering hoods to kill widows? Spider silk has also been used to create the canvas on which to paint portraits.

Finally Eleanor showed that spider silk has musical properties. The vibrations felt through the thread tell spiders much about their world. It is alleged that spiders will respond to human music and Eleanor tested this by creating a silken collar which she placed round her throat with a thread running towards the spider. The vibrations set up as she sang attracted the spider who inched along the thread towards her.

Eleanor’s book Gossamer Days explores these themes from her research into the myth, science and music of the spider thread.

The audience were completely spellbound by the world of the spider and our interaction with them in life, in history and art. We were alerted to the spider orchestra on BBC Radio 4:

Huge thanks to all our Spiderwomen for sharing their insights with us.

A Cluster is the collective noun for a group of spiders!