You are here: Home / Blog / A Morning of Fantastic Fungi: Part One

On Thursday 5th March 2020, we launched our first event of the year, Fantastic Fungi, with guest speakers Jon Tyler and Dr Tony Leech, along side a pop up exhibit of felt artist Joanna Scott’s mushroom-inspired creations.

We started the talk with an introduction from our new Chair, Genevieve Rudd, and then dove straight into an exploration of the Mushrooms exhibition at Somerset House with former Chair, Nicky Stainton, and new Marketing Officer, Hatty Leith (that’s me!).

Mushrooms: The Art, Design and Future of Fungi

As climate change becomes a crisis we cannot ignore, the fragility and complexity of the natural world is becoming hugely resonant… Increasingly, fungi are appearing in contemporary art and design. Mushrooms became prominent in paintings, drawing and collages by contemporary artists in the 1960s… Today there is a veritable explosion of mushrooms in art. Why are artists and designers so drawn to fungi?” Francesca Gavin, Curator

The exhibition at Somerset House explores this question with a series of small rooms, each encapsulating aspects of human fascination with Fungi, from watercolour studies by Beatrix Potter, to Kristel Peters’ shoes made from mycelium. A glass cabinet in the centre of one room displays of old editions of Alice’s Adventures in Wonderland, illustrated by different artists, laid open side by side at the iconic plate: a depiction of the blue philosophical caterpillar, Absolem, sat atop a bright red ‘toadstool’ that, after the talk today, I now know is a Fly Agaric (Amanita muscaria). While this mushroom definitely has hallucinogenic properties, in reality it’s more likely to have put child Alice into a coma than make her very tall or very small. 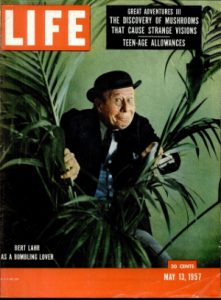 One installation encourages you to stand in the centre of three lurid green tv screens as the videos playing simulate the feeling of a magic mushroom induced high. Another display talks of the groundbreaking 1957 article in Life magazine ‘Seeking the Magic Mushroom’. This article has been widely blamed for bringing hallucinogenic mushrooms to the forefront of the public eye, resulting in its recreational use and the eventual stigma that saw scientific studies into its medicinal use banned or underfunded. It is only now, 60 years later, that studies are beginning to gain traction again.

Nicky and I shared our thoughts on some of the artists’ work that stood out to us. My personal favourites were the hand cut collages by ‘Cut and Paste Magician’ Seana Gavin. Her surreal creations include city scapes cut out of natural forms where mushrooms become large buildings with industrial chimneys, or a combination of bright, obscure fungi become a composition worth of a space opera. It comes as no surprise to hear she is influenced heavily by the likes of Hieronymus Bosch. 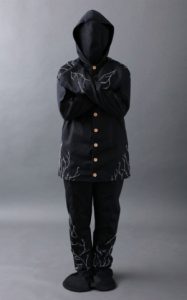 The work that stayed with Nicky the most was the Infinity Burial Suit created by Korean-American artist Jae Rhim Lee. The suit is made from mushrooms and other biological materials that help decompose a human body. The process delivers nutrients to surrounding plants, while cleansing the body and soil of toxins that would be bad for the environment. Lee has set up the company Coeio to sell her burial suits online for $1500. On the website, Lee asks “Could mushrooms be the symbol and tool for a cultural shift in how we think about death and our relationship to the planet?” Since first asking this question to herself, Lee has worn her burial suit to fashion shows and even during a TED Talk in 2011. You can watch her talk here.

Fungi are everywhere. They exist under the earth, on top of our skin and inside our bodies. Their spores are floating around us constantly… They are growing into the human imagination.” Francesca Gavin, Curator

A Morning of Fantastic Fungi: Part Two can be viewed here, where I talk about what we’ve learned from the insightful talks by Jon Tyler and Dr Tony Leech.

If you’re a W&BA member and have an idea in mind for a blog post you’d like to write for us, please get in touch. Email newsletter@waveneyandblytharts.com to discuss your article and we might publish it here.