You are here: Home / Blog / A Morning of Fantastic Fungi: Part Two

This is the second part of our write up about our Fantastic Fungi Event held on 5th arch 2020. To read the first part, click here.

After an informative and inspirational presentation about  the Mushrooms Exhibition on at Somerset House, we introduced our first guest speaker for the morning, Dr Tony Leech.

Leech is a highly respected fungus expert and enthusiast who leads identification walks for many organisations including the National Trust and Norfolk Wildlife Trust. He taught Biology for 27 years and is the Norfolk County Fungus Recorder. He is an entertaining and informative speaker whose talk delved into the world of folklore, ancient beliefs and the deadly power of fungi…

Witches and Devils: The Darker Side of Fungi

During this intriguing talk, Dr Tony Leech gave examples of the links between fungi and the history of witchcraft. 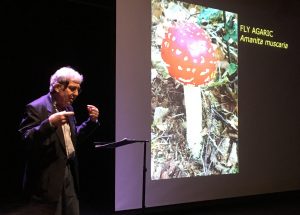 Witches Butter was so named supposedly because of a folk tale involving a woman churning milk which refused to turn to butter because it had been looked upon by a witch. Of course, as with many of these stories, the witch comes to a sticky end.

Along with Witches Butter, there are some wonderful names for fungi that link back to witchcraft. Witches Egg is another name for Stinkhorn, and Devils Fingers or Devils Claws are related to it. Devils Bolete is the only Bolete that is poisonous, and one of only around 20 species of fungi in the UK that is poisonous.

Leech also covered some of the problematic folklore around how to identify edible mushrooms, including prompts like ‘does is blacken a silver spoon?’ And ‘does it peel easily?’ Unsurprisingly, these were not good gages as to how safe it is to eat different varieties of mushroom. 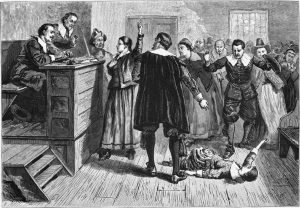 Interestingly, Leech explained that the strongest link between fungi and witchcraft came down to this kind of knowledge- is this mushroom safe to eat or not? From the middle ages, a woman who lived slightly outside a village or town and who had knowledge about edible mushrooms and ones that could be used for their medicinal properties, could be seen as some kind of threat. Being on the margins of society made such women easy to blame for things such as bad harvests, and therefore they would be tried as witches and got rid of.

In records of the last Salem witch trials, Leech pointed out how its worth noting the descriptions of strange behaviour taking place, including fits and hallucinations. At the time, these symptoms were put down to the witches on trail cursing people, however these symptoms also align with signs of mushroom poisoning. We were left to think of that at the end of Leech’s talk.

Next, we had Jon Tyler introduce mushrooms in a more general sense.

Jon Tyler, is a highly experienced forager and bush-craft practitioner with a natural passion and enthusiasm for wildlife, wild food and outdoor living. He gave a broad introduction to fungi, their unique character, field characteristics and role in the ecological system. He talked about the varieties that are special to this area and how to forage for them…

The General Characteristics of Mushroom Varieties

Technically, the word ‘mushroom’ refers to the umbrella-like form of the fruiting body of a fungus. The unseen root network known as mycelium is what makes up the rest of the fungus.

In this type of fungi, Tyler explained that the mycelium threads excrete enzymes that breakdown dead or decaying organic matter such as wood. Species like the Giant Polypore will start off as a parasite, taking from 40 to 100 years to kill a tree. Once the tree is dead, the Polypore will revert to a saprophyte and live off the dead wood. 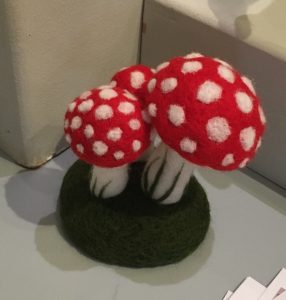 Conversely, the Fly Agaric- one of the most written about varieties of fungi- has recently been understood to actually aid the trees living around it.  Fly Agarics can form partnerships with nearby trees, particularly birch and pines, creating mycorrhizal associations with the trees’ roots, extending the root base and in turn receiving some of the nutrients those roots take out of the soil. Fly Agaric are now known to be unable to survive without this relationship, so they will only be found where there are trees nearby. 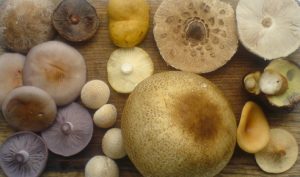 Tyler went on to discuss other ways in which fungi aid the woodland system, including that they break down up to 2 meters of fallen leaves each year, keeping woodland floors rich in soil. It is estimated that there are around 15,000 fungus species in the UK, most of which can be found in wooded areas.

Something that Jon Tyler and Tony Leech both touched upon is the phenomenon of the fairy ring. Only visible as circles of dark grass for most of the year, but fruiting into a ring of mushrooms in autumn, fairy rings were once theorised to be the result of lighting strikes, dancing fairies or even courting mushrooms! Now it is understood that an entire ring comes from just one single fungus spore germinating and producing mycelium which grows out from the centre in a network of threads. As the root-like system grows outward, the central parts die off, meaning when it fruits, the mushrooms come up on the outskirts of the mycelium circle, forming a ring. The network continues to grow underground as the centre dies off, so year on year these fiery rings get larger.  Tyler had recently visited one that measured 40 metres across and is estimated to be 500 years old. Some types of fairy ring can spread to as wide as 2 square kilometres.

Incredible facts peppered both talks, and I feel I came away from the talks almost more fascinated than I was before the day began. Thankfully the experience wasn’t entirely over as there were some wonderful displays to look through in The Cut Cafe. Jon Tyler exhibited some of his mushroom paraphernalia, while Halesworth book shop provided a fine selection of mushroom-themed books.

The pièce de résistance was by far Joanna Scott’s display of hand felted mushrooms and garden birds. Made using natural wool, a barbed needle and a lot of stabbing, Scott’s creations were beautiful to behold. A small workshop was held for those who wanted to try their hand at making their own mushroom and I’m only sad I didn’t get to stick around to see the end results!

All in all, it was a great morning. We’d like to say a special thanks to our guest speakers Dr Tony Leech and Jon Tyler for sharing their expertise, and to Joanna Scott for sharing her gorgeous creations with us.