You are here: Home / Blog / Blog: Haiku and Moths at Geldeston Locks 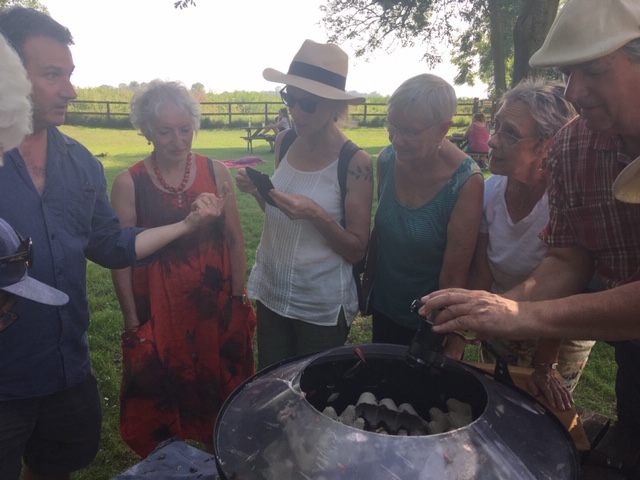 On a sultry afternoon in July those who were not felled by the heat gathered in the lovely setting of The Locks Inn at Geldeston to create short poems and haikus. 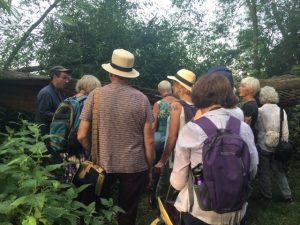 Tim Gardiner, a wildlife expert as well as a prize-winning published poet and specialist in Japanese short-form poetry, introduced us to the essentials of haiku writing. In addition to the well-known stipulation of a maximum 17 syllables (normally 5,7,5 per line) we were told that traditionally all haiku were about the natural world, reference the seasons in some way, have a break that cuts the poem into two contrasting parts, and use irony, surprise or emotion to ensure that the poem means more than it apparently says. They are, as Tim pointed out, deceptively simple.

He then advised us not be overly constrained by the rules, apart from the overall length, and to concentrate more on the rhythm, alliteration, metaphors and imagery. With that liberating message we wandered into the adjacent cool, shady woods (thanks to River Waveney Trust for securing this little gem for public use) to take inspiration.

After a few hours and a very productive group ‘crit’ we each had a couple of poems we were happy to share. Thanks to all who took part, a combination of more and less experienced poets, and to the laid-back but effective Dr Gardiner.

Fallen not felled
Willow will not weep

Footprints in duckweed
Scatter surface waters
Only to close over

duck weed blanket
holds our shadow
before we drown

wren stabs a warning
near nettles laden with
their own venom

And, last but not least, Tim Gardiner:

wild hops intoxicated by the view

prize pike
in the cabinet
beware the hunter

Some of us stayed on and were joined for the second event of the day – a talk about moths and a walk led by renowned naturalist and nature writer, Mark Cocker. 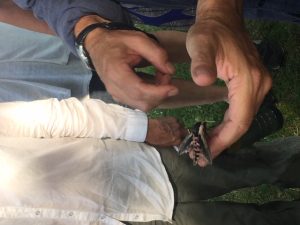 Mark had promised to set a moth-trap in his garden the previous night and bring a few specimens from the nearby Yare valley for us to look at. What he brought was the most amazing cornucopia of moth life. He revealed hundreds of the creatures, from the flamboyantly colourful pink and green privet hawk-moth and eerily spectral poplar hawk-moth to dozens of pretty little rosy footman moths and their more restrained cousins, the common footman, as well as arches, cinnabar and gypsy moths.

We watched in fascination as he brought out these treasures and shared information and statistics about moths, a group of insects related to butterflies, belonging to the order Lepidoptera. There are thought to be approximately 160,000 species of moth, many of which have yet to be described. Mark pointed out that only 3 or 4 of these are the type of house moths that eat our clothes and textiles and are not greatly loved by humans. In common with all other insects moths have a vital part to play in a healthy ecosystem.

Once all the moths had been released into their new habitat we went for a short guided walk spotting a brilliant blue-green banded demoiselle (damselfly), spiders and other often overlooked wildlife elements feeding and breeding around us.

As the temperature dropped a little some of us stayed for a delicious supper in the garden of The Locks. We are very grateful to Grain Brewery, the new owners of the pub, for giving us use of their lounge, free run of their grounds and a warm welcome. It was the perfect setting for this fascinating day, and well worth a visit for anyone who loves the quiet beauty of the Waveney Valley and its unspoilt grazing meadows.