You are here: Home / Archives for Member Activities 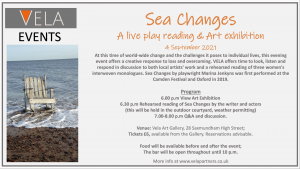 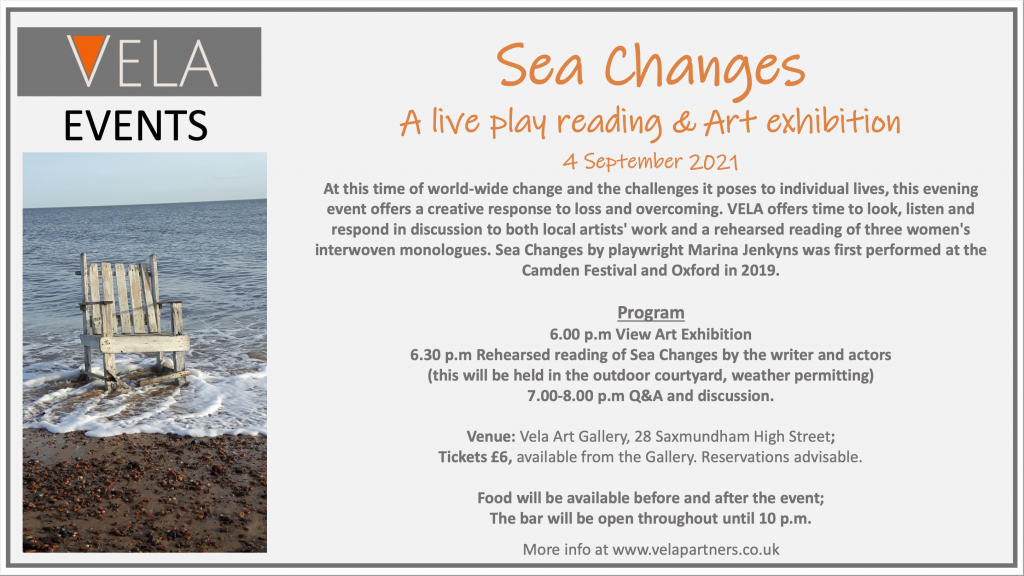 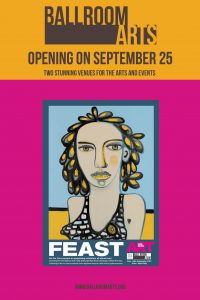 Ballroom Arts is two stunning venues for the arts and events in Aldeburgh.

Following an extensive renovation by Tom Brent, Managing Director of Urban Resolve Ltd, Ballroom Arts will open to the public on September 25th in partnership with breast cancer research charity Art for Cure and their show ‘Feast’.

Featuring artists from East Anglia and beyond, ‘Feast’ will show and sell work in the Courtyard Gallery and The Ballroom.

Tickets for the Private View on Sept 24th are available from https://www.ticketgun.com/events/feast-private-view.

We are now taking bookings for both venues from October, with full details on our website. 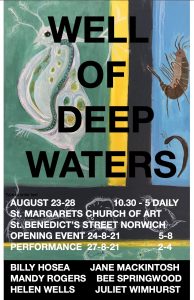 WBA member Bee Springwood will be showing work including paintings, sculpture,  installations, with film and two live art events over the week. In central Norwich, do come and visit us. 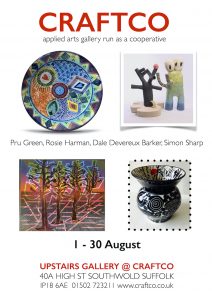 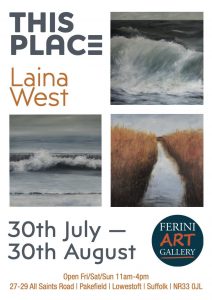 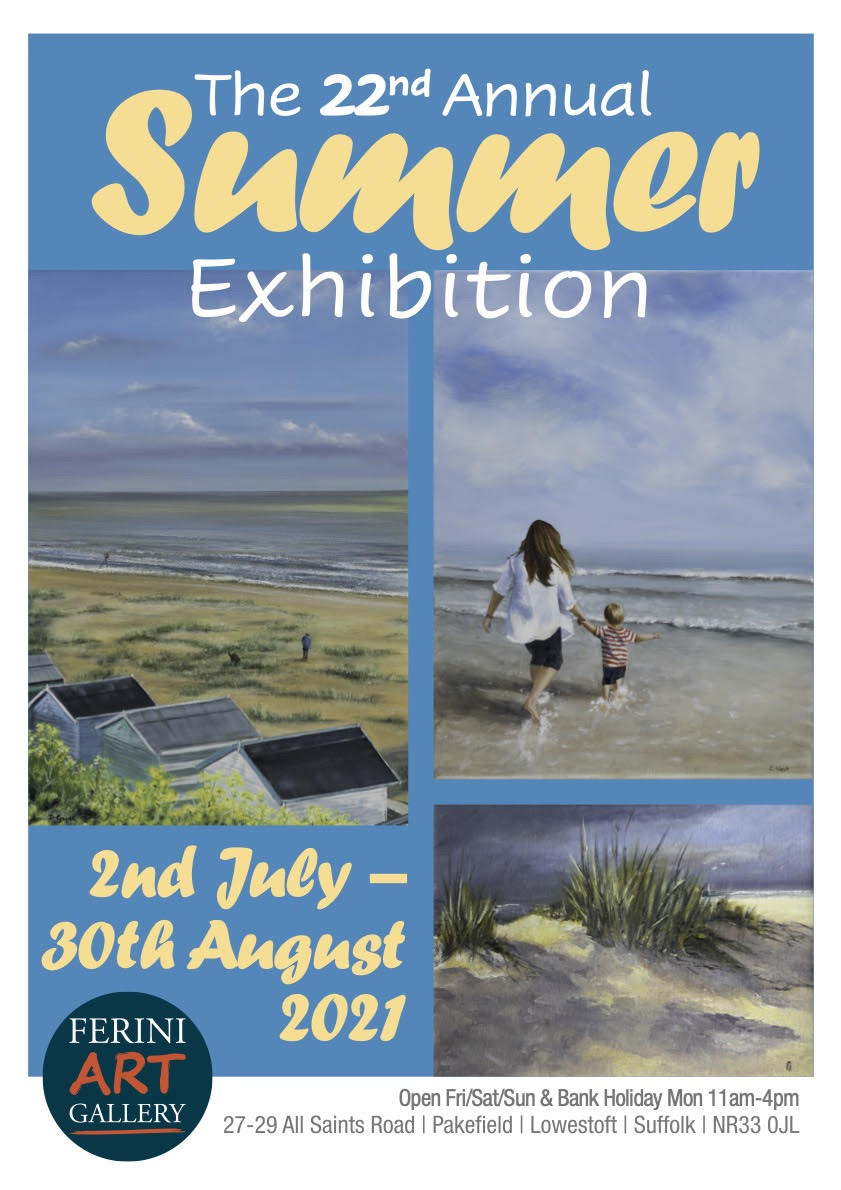 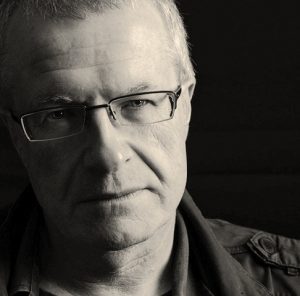 Denton (Waveney Valley)-based writer Charles Christian has a new book out. Called ‘Shuckland’, it is volume one in a new Haunted Landscapes series from Heart of Albion publishing, and covers some of the weird tales, ghosts, folklore and legends of the Waveney Valley. It takes the form of a travel guide along the Waveney Valley, from Redgrave Fen down to the sea, taking in on its way ghosts of avenging kings, highwaymen, headless queens, ancient buried treasures, demonic entities, notorious villains, treacherous barons, murderous earls, ley-lines, paganism, yew-shrouded churchyards, old ivy-covered houses, witchcraft, strange fearsome beasts – including the notorious Black Shuck who gives his name to Shuckland. 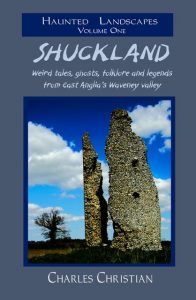 Charles Christian is an English barrister and Reuters correspondent turned writer, award-winning tech journalist, and podcaster with a soft spot for history. He was born a ‘chime child’ with a caul so, according to legend, cannot drown at sea but can see and talk to ghosts and fairy folk without fear of coming to harm – allegedly!

Shuckland is out now in print (£12.95) and ebook (£3.25) formats from bookshops and online. Full availability details here 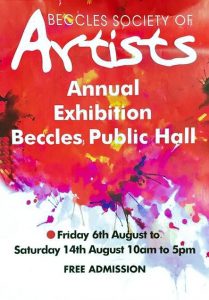 The Beccles Society of Artists have pleasure in inviting you to their Annual exhibition, after having to cancel last year’s event. This year’s exhibition showcases the varied artwork that the talented members have created over the past two years. 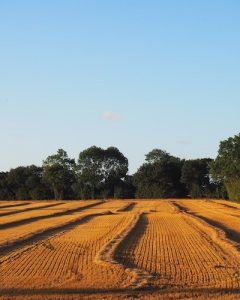 It has been an odd year and sometimes it is difficult to work out which month we are in. July went out in storms, winds and rain. But now August arrives – the month of corn and harvest.

On Lammas Day, 1st August, the farmyard was filled with a flock of swallows, swifts and house martins, all wheeling and chattering together. Maybe the light northerly wind is encouraging them to follow the cuckoos south. I was surprised to see the martins as there have been none in the village this year and they haven’t returned to their nest site on the house.

This month is all about colour and movement. The barleys have already been combined and the wheats will follow – suddenly the landscape takes on a different shape. We can see several fields away as the crops are shorn. The pale straw yellows of the ripening cereals are replaced by short deep gold stubbles. Hares have fewer places to hide and the harvest exposes hidden wildlife. One day the field is covered in giant rolls of straw, the next day they are gone. It creates a sense of the year coming to an end. The days are getting shorter and we think about storing food – making jams, sloe gin, apple pies and going blackberrying. Look out for scarecrow festivals this month – a chance to ‘dress’ the front garden and celebrate the harvest. 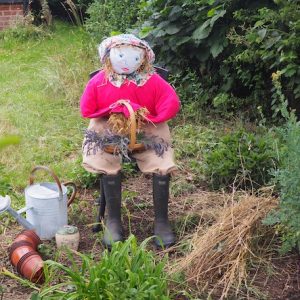 Scarecrow waiting for judgement in a village festival

Wildlife is dispersing. Not just the summer migrants but flocks of jackdaw and rook, swelled by so many young birds, are relocating noisily away from their breeding sites. Even plants are dispersing – we come home covered in clingy seeds from cleavers and herb bennet, other seeds catapult from pods as you brush past them. The rowan tree is weighed down with orange fruit but the blackbirds have already stripped the cherries and Amelanchier berries. Around the churchyard is a thick hedge of Myrobalan plum which drops an abundance of red and yellow fruits.

The green of summer becomes dusty and drab and hedgerows switch to yellow and purple as the late season flowers appear – St John’s wort, knapweed, chicory, scabious. In gardens the towering soft leaves of Greater Mullein stretch upwards nearly six foot high. Apparently the woolly leaves were used to line moccasins but we search them for the Mullein moth.  There are often surprises in the fields as farmers plant patches of wild bird seed mix. On the farm here we have magical colour palettes of Phacelia, linseed, various crucifers and Amaranth. 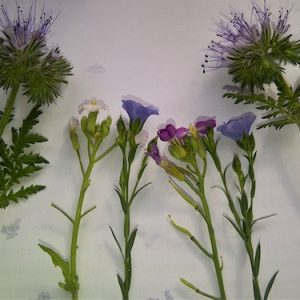 August is a month when we stand poised for change looking ahead to shortening days, low sunlight painting red hues in the garden, birds and insects materialising and disappearing. Harvest the sights and smells now and store them up, preparing for the winter months to come. 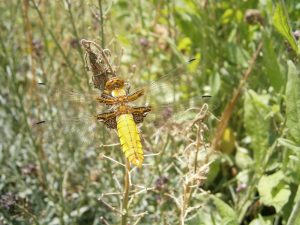 Half way through the year now, the summer solstice has passed and the on-off summer lurches on. The days will begin to shorten. Swifts are screaming through the garden as they prepare to leave us. Every year, they fly up at the eaves of the house and perch briefly on the gutters. I assume they are checking out nest sites for next year and will probably be first time breeders at three or four years old. Swifts seem to define our summers but then one morning I realise they haven’t been heard for a few days. They were still here this week but as July moves on so will the swifts.
July’s other great winged visitors are the dragonflies and damselflies. I made a lockdown pond and, although small and still settling into itself, it has been blessed by four different species. The first to arrive was a male Broad Bodied Chaser – known for quickly colonising new ponds. It is very territorial and sits on nearby perches to keep an eye open for rivals, every few minutes doing a quick tour and back to its sunny spot. After a week a female arrived, brown to his blue, and was soon laying eggs into the water. Chasers lay what are known as Exophytic eggs, round eggs that are deposited directly into the water and lie just below the surface.
The next visitor was the Common Blue Damselfly. Tiny little darts of blue hovering around the pond – there were five males on several days. One female arrived and, protected by her successful suitor, laid her eggs. Damselflies lay Endophytic eggs, oval shaped eggs laid directly into plant stems or rotting wood. 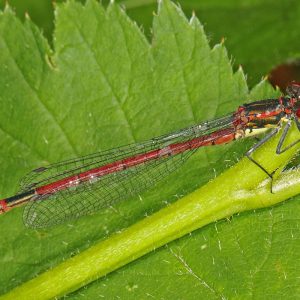 A Large Red Damselfly visited several times, resting on plants, but remained alone and has not been seen this last week. And finally a female Southern Hawker arrived. She spent about 15 minutes laying her eggs into the stems of some emerging plants, every so often being harried by the Chaser. When she finished she flew up, high above the oak tree, and disappeared.
Now I have a new pond already expectant with three species of these amazing creatures. Eggs usually hatch within a few weeks but it will be 2-3 years before the life cycle completes and the larvae emerge to become the dragonflies that grace our summer. Just before dawn on a warm July day the nymphs will emerge from the pond and around12 hours later the adults take to the wing. With fossil dragonflies being found from over 300 million years ago this is a story that keeps unfolding.
Damselflies are smaller and at rest close their wings whereas the larger dragonflies rest with their wings open. Damselflies have more of a fluttering flight, seeming delicate and more fluid in character. The more robust dragonfly can be an aggressive predator and its stiff wings can be heard as it comes up to inspect you or rushes down a green lane looking for insects. Masters of aerobatics they can move each wing independently allowing them to hover, fly backwards and turn sharply. They can also fly at speeds of up to 30mph.
There are 57 species recorded in the UK but only a dozen are more commonly seen. They are rich in imagery and name.  Darters, chasers and hawkers describe the main groups of dragonflies and their colours are jewels: emerald, azure, sapphire and ruby. Imagine the rippled reflections of sunlight on water and you will see the glory of these winged insects as they sparkle across a wetland.
Metamorphosis by Melinda Appleby

I have a fancy for a dual life
so I can taste the water
and the air. I’d like to try
being ugly, overlooked
and where I can hang out
with fish and frogs and feel
caress of ripples, share
the bubbled oxygen that
diving beetles bring,
and the sun  clear through
a skin of water. But then –
oh joy – to creep up some
tall stem of reed, clasp to it
under summer sun, to shed
the damp and blackened me
and there, plant slung,
unfold a mirror to the sky,
pump up my wings,
shiver out of water 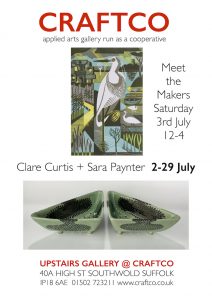 Clare Curtis and Sara Painter 2 – 29 July at Craftco in Southwold.