You are here: Home / Blog / Talk-Walk-Reflect

The importance of nature during lockdown helped us cope, heal and keep connected with life, as explored in a recent article in The Guardian. As imminently start our second national lockdown this November, we’re looking back at our Talk-Walk-Reflect project earlier in autumn.

Our cornerstone creative walks programme wasn’t able to go ahead this year, but we felt strongly that experiencing the natural world was more important than ever to include in our slimmed down ‘Virtually Autumn’ programme.

In mid-September, writers Ruthie Collins, John Arnett and Melinda Appleby, chaired by Genevieve Rudd, took the group on a journey along the River Waveney… 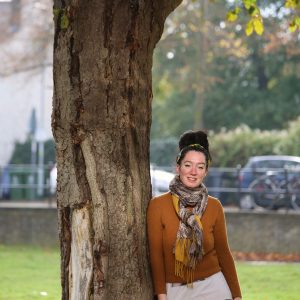 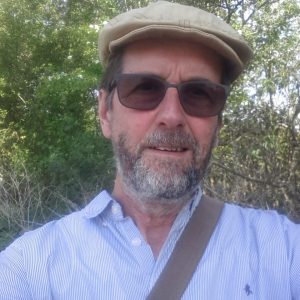 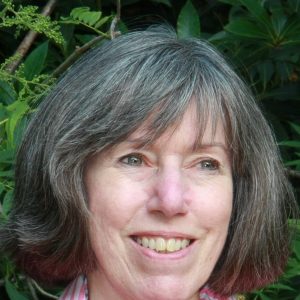 At the top of the Waveney Valley, Ruthie Collins spoke about being inspired by the waterways, personally, culturally and socially. Ruthie creates ‘poetry as public art’, installed in everyday locations, such as Great Yarmouth train station and writes in response to heritage, hidden voices and our relationship with nature. Her inspiration is found in the journey – walking as art – and draws parallels between the processes of walking and writing. Watch out for her public art poem Dreaming of Albion, commissioned by Norfolk County Council, to be installed in 2021.

To receive a Natural Wonder ‘inspiration kit’ to go with the poem, featuring trails, poetry and activities to inspire wellbeing, literacy and writing – email ruthie@ruthiecollins.co.uk.

John Arnett, based in the mid-Waveney Valley at Harleston, spoke about the process of compiling his book: ‘By the Waveney…: Wonderful walks in the Waveney Valley’. Initially published by the River Waveney Trust in 2016, John is now in the process of updating the first book, and writing a second collection of walks covering a slightly wider area. John said that walking in universal – “there is no such thing as a professional walker” – and linked this with early stages of all of our lives, learning to walk for the first time.

If you’d like a copy of John’s book, please email: johnarnett@btinternet.com.

And finally, Melinda Appleby, represented the lower Waveney Valley around Diss. She spoke about “finding the magic in the mundane” as an approach to landscape writing. Melinda’s own approach is about nature, culture and connections. She gave readings from her work which hone in on detail from the process of regular walking. She said that starting from your doorstep, even if you live somewhere urban, can be inspiring if you take a closer look, such as dandelions growing through the cracks.

In response, the Talk-Walk Reflect group took their notebooks, put on their walking books and stepped out in the Waveney Valley to see the landscape through new perspectives…

In no particular order, please enjoy the written, visual and video responses the group created or sourced as inspiration, which has been shared with their kind permission.

I am fortunate to be able to walk to the river Waveney from my front door. In one direction, I can walk along the river into Beccles, and, in the other direction, to the Carlton Marshes nature reserve. When I walk here, I sometimes like to give myself a threshold from which the walk begins. This is often the large metal gate across the railway line between Lowestoft and Ipswich which I need to open, and close, en route to the river. To the side of the gate, stands an imposing sign. It reads, in bold letters:
Stop, Look, Listen. And in smaller print, “ beware of trains”.

Is that a warning to stop, look and listen? Or, as I prefer to view it, an invitation? I take it as a way of approaching the walk I am about to take. I set myself: I will be ready to stop, to simply stand still as I make my way through the woods to the river. I will look – all around me, down on the ground, and up to the sky. I may see something I have not seen before, or see it in a way I had not expected. And I will listen – to the sounds around me, to the instant of silence, and to myself as I move forwards, step by step.

I am interested in noting how the outer landscape affects my inner landscape – the mood I am in, the impact that the route to the river has on me, emotionally and physically. Does my presence have an impact on the area around me? Clearly it does, and so I am in a relationship with the route that I take. Is it too far fetched to say that we affect each other?

The question of whether or not I feel I belong here is one that I find myself thinking about. I am not from here – but can I begin to be of here? I have lived in a city most of my life and this rural setting is relatively new to me. I cannot name plants or birds or trees- they feel somewhat alien to me. But part of me feels that I need to try and befriend them. They are welcoming me, and it is only polite to be interested in them. I just hope they don’t mind if I forget their names, or have to admit that I do not know it.

TM 07 80
(near Wortham Ling, the site of the discovery of a Saxon brooch)

And just here, the brooch slips from her clothes,
where the airy heath space opens
between the woodlands. Her cloak works loose
from the copper clasp and it slides,
already cooling, into the sandy silt.
She nudges her horse onto the bridge,
keeps the low road behind her.
Just cattle-compacted earth, here,
no more than a stepping-stone across
the stream of her childhood – too shallow
for fishing, too narrow for skimming stones.
She will never come back for it, but
will feel its absence later, when a chill
settles round her neck through the mist
and she reaches in the darkness for her cloak’s
thick folds. But she holds her gaze straight ahead,
between her horse’s ears, the brooch now
just another thing which she has left behind. 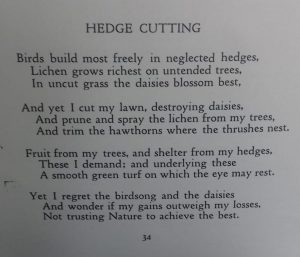 Netta filmed a hedge near Geldeston filled with birdsong on a backdrop of speeding cars, which was inspired by a poem from the 1940s called ‘Hedge Cutting’ from the book Poems of the Land Army. 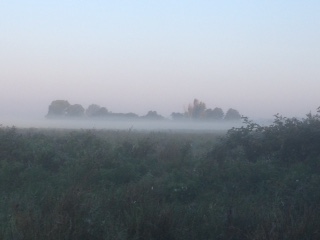 From the dyke, across the marsh the line of trees marks the river’s banks. A heron flies low and slow along the river’s course, as marsh harriers (three today) quarter the scrape with swooping flight.
A kestrel’s hovering reflection shimmers on the surface mid-way across the dyke. Underbelly pale and barred tail feathers fanned out, gently angling to maintain eye contact with the ground.

Today the dyke has oily eddies, swirling downstream, and small bubbles pass on their way to meet the river. Andromeda and Jewel of Light pass my watch-point as I stand on the fisherman’s stage. Their wash disturbing a string of yellow wat 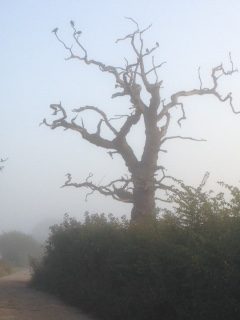 er lily, submerging the floating heads for an instant until their buoyant, cupped flowers re-emerge. I remember how their common name is Brandy Bottle, so named because their smell is reminiscent of dregs of wine. I don’t catch that scent today, just the fresh smell of wet reed and lush marsh grass.

A sudden splash and I’m in time to see a fish leap, attracted by a fly above the surface. Out of its element for a moment, it quickly drops back into the still water and concentric ripples extend towards the banks. At its re-entry point, air is trapped into bubbles on the surface and I watch as they float, in small groups, on down the dyke.
It’s a moment in time where my observation changes what I’ve always believed about bubbles passing in the dyke. I realise now that what I’d assumed to be marsh gas bubbles from the mud, may have another cause. They may, instead, be echoes of ambitious upstream fish. 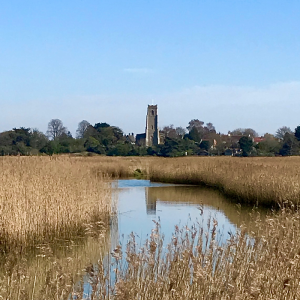 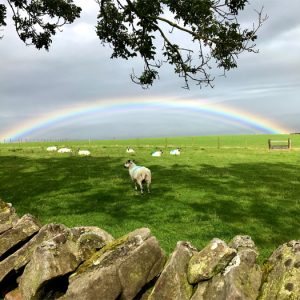 One Self Two Landscapes – Ann Follows

One Self Two Landscapes.

Born of water and reed
my heart-home is flatland
marsh, estuary, creek.

Cumbrian Fell and Dale
is rock and stone of glacial
form, heat and cool locked firm.

The Dales Way is a drovers’ route
cuts through market town,
field and woodland, glade and peak.

A thousand miles of dry stone wall,
like pencil lines but built not drawn,
head not heart,
hewn not dug they square the hillsides.

Moss, lichen, curlew, lark
harebell, meadow buttercup
they thrive in both – as do I.