You are here: Home / Blog / Where Otters Dwell 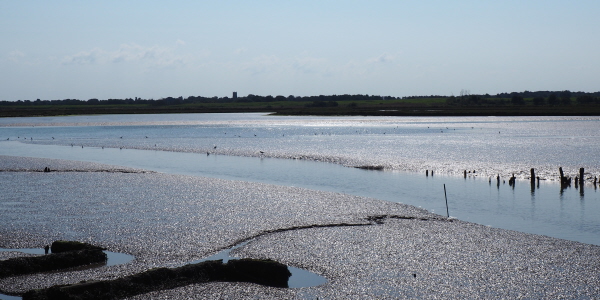 Bright sunshine and an easterly wind made for a splendid otter hunt on the Blyth Estuary.

Led by Meg Amsden, artist and citizen scientist, we hunted the mud and marshes for signs of otters. Meg explained the background to the otter surveys in which she is involved.

“I got up early one October morning two years ago to film the mist over the estuary, as the tide was going out.  Seagulls and crows were making a din. I ignored them at first as I struggled in vain to capture the mist, then gave up and turned the camera, still running, towards the birds. Into frame, running from pool to pool, submerging, fishing, swimming, loping across the mud, came an otter. I watched it till it disappeared into the river. It felt like a moment outside time, like a gift, a message that had to be listened to. I sent the two and a half minute film to a friend, who passed it on to Richard Woolnough, a local naturalist, who was waiting for the incentive to start a Blyth Valley otter survey group. Within 10 days we met up for the first time, and have continued to meet; to learn how to identify, collect, clean and analyse otter spraint, to look for other evidence of their presence, and to try to extrapolate from our research how they live.”

Unlike last year, where footprints, trails and spraints were found in good numbers, we could find only limited evidence of otters using this part of the Blyth. Perhaps there is just one otter here.

Instead we learned from botanist Graham Peck about the saltmarsh vegetation that can be found along the banks and saltings, creating a varied habitat for animals and insects. We heard readings from poetry and prose celebrating otters in our lives and enjoyed how the words came to life out in the salty air.

The walk started once again from the Hen Reedbeds nature reserve, owned and managed by the Suffolk Wildlife Trust, and we were lucky to see a hobby and a marsh harrier before we set off. Les Tarver, volunteer warden, explained just how special the site is.

The highlight of the day was seeing a shoal of grey mullet so close into the bank and in shallow water. Known as the grey ghost, they come up estuaries feeding on invertebrates, algae and seaweed. Will the otter, in turn, feed on them?

Paying close attention to detail is the hallmark of a good artist and looking at the different plants on the saltings, hearing the calls of redshank, smelling the oozy mud and seeing the shimmer of sun on the grey tide washed mud, all gave ample creative inspiration.

Our readings were from:

The Otter by Seamus Heaney