These are Christopher Lloyd’s top 20 paintings on public view in the UK outside London. The first 17 are in chronological order; then there is a countdown of his top three. They are taken from his wonderful book, In Search of a Masterpiece: An Art Lover’s Guide to Great Britain and Ireland (Thames & Hudson). The descriptions have been freely adapted (with apologies ) from the book. 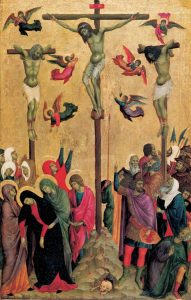 This composition echoes that on the huge altarpiece, known as the Maestà, painted for Siena Cathedral. Unlike the Florentine school, Duccio favoured linear intensity and incandescent colour. The ethereal (flying angels) contrasts with the realistic (the blood-
spattered Roman soldier) 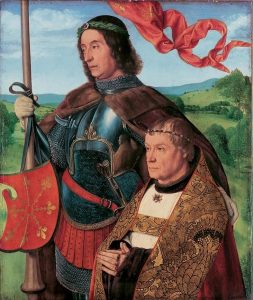 A fragment from a lost altarpiece, possibly by Jean Hey. The detail is mesmerising: the warrior saint’s fur mantle, the donor’s cape; above all, the reflection of the donor’s profile in the side of the saint’s armour

Tintoretto, Tiian and Veronese were the great triumvirate of Venetian Renaissance painters. This is the original from San Marcuola in Venice (replaced by a copy, no-one knows why): an enormous canvas with vibrant brushwork and plunging perspective; the main business enacted in the lower corners. It once belonged to Sir Joshua Reynolds. 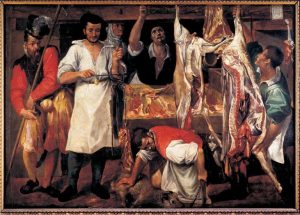 Tremendous detail in a large painting of an everyday scene – but realism was common in Bologna, where this originated; it may even include portraits of the artist’s family. The painting came via the Dukes of Mantua, then Charles l’s collection, to hang in the
college kitchen for many years. It was recognised in the 20 th century and moved into the gallery.

Charles le Brun Hercules and the Horses of Diomedes 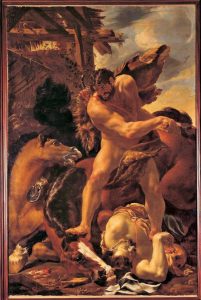 Hercules feeding Diomedes to his horses was somehow a tribute to Cardinal Richelieu and was an overmantel in his Palais Royale in Paris. The energetic composition of tangled figures is impressive 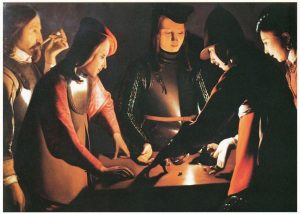 The painter was something of a mystery: little known of his life, a limited output, and enigmatic subjects. Here for example the man on the left is picking a pocket, and there may be some cheating. There is a striking use of light: the candle is even half-hidden. 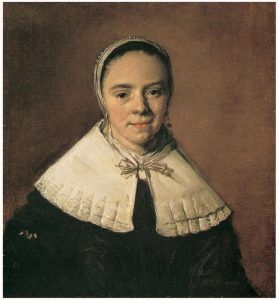 Second only to Rembrandt among Dutch painters, Hals’ portraits are confrontational and spirited. The angle of the shoulders, the tilt of the head, the smile – all convey movement and sparkle. There is a sophisticated handling of colour. 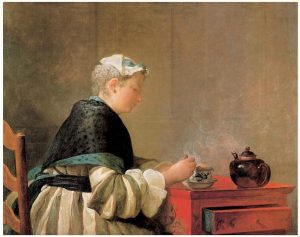 Chardin was a quiet revolutionary in his choice of domestic subjects, in this case his wife. Although there are unresolved problems with perspective, the ruminative detachment is enhanced by soft colouring and emphasis on the materials 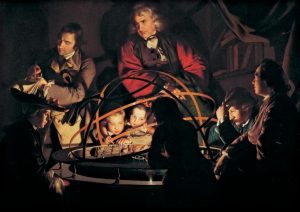 A document of the Enlightenment. Wright attended lectures like this, where an orrery demonstrates the workings of the solar system. The illuminating light (tenebrism) represents knowledge and symbolises the driving out of ignorance; on the faces of the
children it represents innocence. 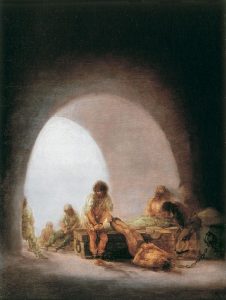 Goya, now deaf and withdrawn, witnessed the Spanish insurgency against Napoleon; this small, gloomy picture was a result. The careful composition is strong; the misery of the wretched prisoners heightened by the arch and thick walls, hinting at other captives
beyond.

Johan Christian Dahl Mother and Child by the Sea 1840 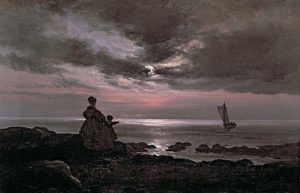 Moonlight is a recurring theme in Romanticism, often used symbolically. Here it is partially obscured by cloud. Are the mother and child simply waiting to welcome the father home, or is the boat a symbol for the transience of life?

Although not a member of the Brotherhood, and interested in literary and social subjects, Brown was closely allied to the Pre-Raphaelites. John Ruskin did not like the mundane detail in this painting, but the view is spectacular and the dovecot suggests
the pair are lovers. 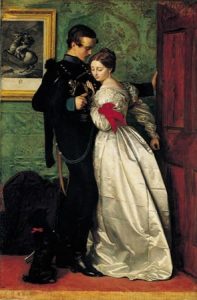 An historical painting with telling references: Napoleon crossing the Alps in the painting on the wall, the anxious dog, the German soldier keen to get off to war (but ominously wearing black), his hand on the door contrasting with the worried, hurried embrace.
The model for the young woman holding on to the door handle is Charles Dickens’ daughter Kate. 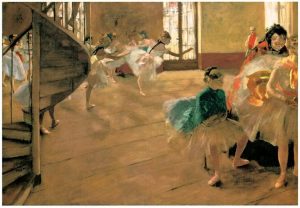 Degas saw ballet as a metaphor for his own art: a physical challenge, the endless search for perfection – thus his frequent focus on rehearsal not performance. His composition is radical: the staircase makes little sense at first, figures are cropped, the view is into
the light (contre-jour) and there’s a void in the middle of the painting. 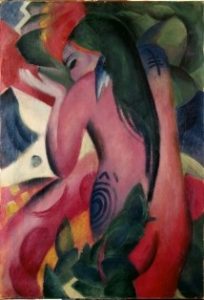 A rarity in Britain and possibly most important work by a German expressionist artist in a public collection. He was one of the Blue Rider group, who found inspiration in the medieval. The woman here is Eve in the Garden of Eden, her figure blending perfectly
with the surrounding. Inncocence lost? 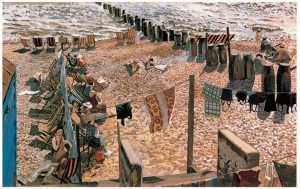 A significant year for Spencer: he was divorcing his first wife Hilda Carline (they were married at Wangford) and marrying his muse Patricia Preece (who continued to live mainly with her lover, Dorothy Hepworth, whose paintings she passed off as her own). Here the breakwater and beach hut anchor the composition , but the focus is on the mulititude of everyday objects that dominate the picture. 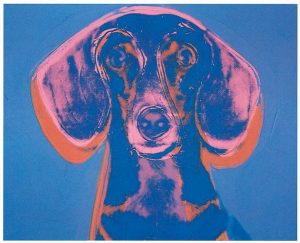 The dachshund belonged to Gabrielle Keiller the Dundee marmalade heiress, and a major benefactor of this gallery. The medium is a polaroid photograph and a silk screen print heightened with oil paint – a mix characteristic of Warhol’s revolutionary approach to art. His subjects, too, were a mix of the mundane, portraits and historical events. 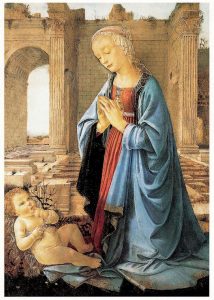 A picture made for private devotion; its beauty lies in the simplicity of its pyramidal design. The child is routine, but the Virgin is unsurpassed. The Roman Forum background symbolises the passing of the old laws in favour of Christ’s. The damage the painting has sustained does not detract from the sense of quality – indeed of awe. 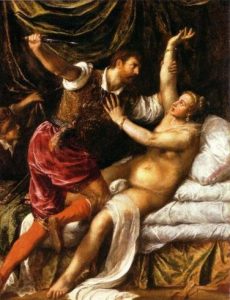 Most Renaissance artists have the chaste Lucretia killing herself, having been raped and forced by King Tarquin to admit adultery. This version is both more violent and laboriously detailed. The contrast in colours between the interlocking pair, the scissors-like movement of the flailing arms, the knife, the fear in her eyes – all bring dynamic propulsion. 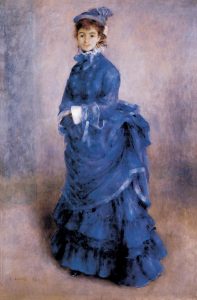 The finest full-length portrait in the whole of Impressionism, yet it represents a type rather than an individual. As always with Renoir, things are in flux: feathery brushwork, thin paint; and the rhythmic movement in the angle of the shoulders, the turn of the
head, the glimmer of polished shoe. She will pass us by, perhaps a greeting if we are lucky. Do we remember her? Are we dreaming? Such is art and such is the power of a masterpiece.