We are one with nature now

Pink sun on silver frost. I see the hares. Out of the oilseed rape, across the ditch, onto the plough. Three hares running, running not crouching in the tramlines or jinking erratically for cover. It lifts the spirits this early morning race. Tugged by sap rising, March hares put life into empty fields. Today they own the landscape. They remind me of the symbol of three hares, the mystical motifs found in Devon churches. Three hares each with two ears but only three ears between them.**

This year I saw them in February and some mornings I would catch them in a dance of eight or nine running and circling. They have woven their magic after a full moon night. Give them space to run and a place to shelter. Three hares running.

It is March at last and after a long winter of flood, snow, frost and lockdown we search for signs of spring. There is warmth in the sun when it appears and the longer days mean that birds are on the move. Winter has stripped the countryside bare. The trees are shrivelled by cold winds and frost, branches snapped, last leaves tossed to the fields. Gales felled hedgerow trees tumbled in a sprawl of ivy. Dried tufts of grasses are flattened by the wind, shrink wrapped against field edges.

This is the ‘Hungry Gap’ – the end of winter when last year’s food reserves are at their lowest but there is still little growth to provide new seeds and insects have yet to emerge.  The Hungry Gap was named by gardeners for this time of year, when all that was left on the allotment were a few cabbages, potatoes and carrots. The winter diet was uninspiring and yet the new crops were only just being set and a long way from providing food.

The yellowhammers have been here most mornings, their cheery song bursting from the hawthorn bushes, a splash of citron caught in first light. There are usually eight foraging on aniseed coated seed that spills from the bird feeders. No reed buntings or tree sparrows now – just two species that have been rubbed out of our landscape.

But we look for signs of hope and March brings one of the first of the spring migrations. On warm moist nights the toads are moving. I organise the toad rota in the village and each night someone goes out to rescue toads who are setting off across the road for their amorous tryst in the village pond.

Toads use the lunar cycle to co-ordinate their gatherings, ensuring that enough males and females come together at the same time. They arrive at the breeding sites, mate and spawn around the full Moon. This maximises their breeding success and reduces the odds of being eaten. But they also need night-time temperatures to be above 5 or 6 degrees.

There is a magic about toad collecting. We drag ourselves away from the fire, take buckets and torches and walk up to the green. A Little Owl calls its mournful whoooo. Pigeons clatter, disturbed from their roost. Dusk falls. The air is quiet. Then a squeaking call from the ditch. Toads emerge, tentative, a face peering from grass verge, venturing onto the road, heading for water.  For an hour we follow a route round the pond and down the side roads from where toads are emerging in ones and twos. Some are already paired up. ‘The bucket dating agency’ one of my patrollers says.

We count males and females, frogs, newts. Some nights we collect hundreds and remove those we didn’t manage to save from passing cars. Gently they are released into the rippled depths of the pond. The torch spotlights them. Some make off, strong kicking back legs, needing to make up for lost time. Some hang there, floating, back legs splayed, remembering the feel of water after a winter in earth and wood.

There is much to enjoy about the coming of spring, the feeling of release as the cold and the dark lose their grip on the countryside. Armed with camera, notebook and pen I try to capture the sights and sounds, smells and tastes of March.

**The story of the search for the three hares motif is told in a book published in 2016 https://www.newscientist.com/article/2082809-the-three-hares-motif-is-an-ancient-mystery-for-our-times/ 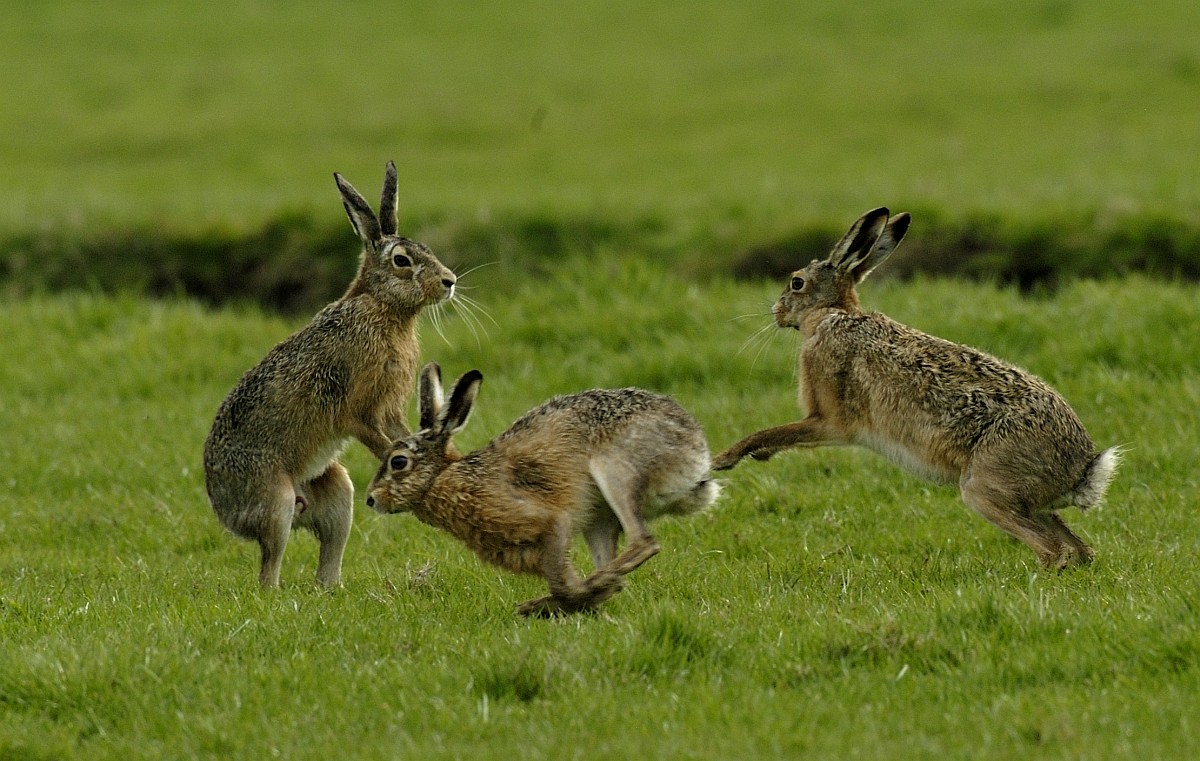