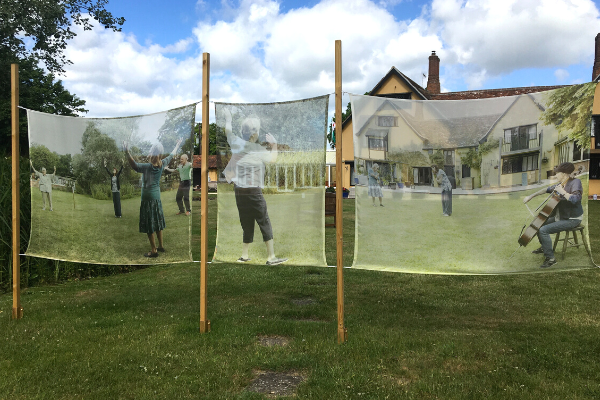 In 2021 Mel facilitated a life-enhancing dance workshop at an evening session during Waveney and Blyth Arts’ first Sculpture in the Valley residency at Potton Hall near Westleton. We could not know then that it was to be one of her last public acts as an inspired creator and communicator of dance.  Barely six months later she died after a short illness.

Mel was a woman of many talents. She recognised the importance of art, in all its forms, as a vital way to express and shape ourselves and our experiences throughout our lives. This understanding was the foundation of much of her formal and informal work.

Early in her life she was a professional ballet dancer but later through her work as a teacher in Suffolk schools and in adult education and her own study at the Laban Centre and Middlesex University, she developed a dance practice working with groups of various ages in a variety of settings. She collaborated with family, friends and communities in Suffolk and Norfolk producing her own work but also encouraging and supporting the development of others’ skills and expression in different art forms.

In addition, she learned the skills to produce, direct and edit films showing people dancing in response to the landscapes and buildings of East Suffolk.  She also made a film celebrating the life and work of Scilla Dyke, Made in Suffolk, which was shown at Dance East.

As a person, she was perceptive, humorous and quietly persistent. She approached things imaginatively and was always ready to come up with new perspectives. She was never content with the superficial but wanted to explore ideas in depth.  These qualities enabled her to work creatively with people of different ages and in different contexts. They also made her a good friend and I was fortunate to be one of them. Mel and I ran workshops on several occasions looking at the connections between dance and visual art.  So she asked me to take photographs of that final workshop as part of last year’s Sculpture in the Valley.

Mel will be much missed not only by her family and friends but by her community, to which she contributed so much. To honour her memory I have had photographic images of that final workshop printed on translucent silk. They are hung looking towards the garden where last year she danced with the group.  In that sense I hope that you too will experience the layers of time and memory – time then with time now, the imagined and the real, between two worlds – and thereby pause to reflect on all that she gave us.