A view from behind the scenes 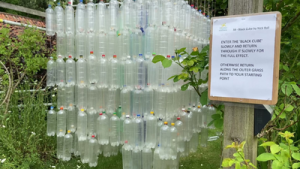 This was Waveney and Blyth Arts’ second residency at Potton Hall. Thirty-eight artists submitted work for the trail on the theme of Between Two Worlds. It was pleasing to note that nearly a quarter of the exhibitors were first timers with Waveney and Blyth Arts. The result was an eclectic mix of approaches, materials and interpretations. It was lovely to hear animated discussions about the trail as people passed through our reception marquee, and this was also reflected in the highly appreciative comments which were made both verbally and in our visitors book. 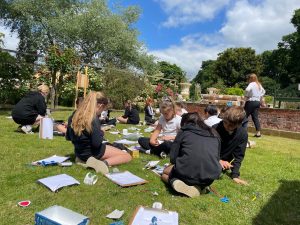 This year we were approached for the first time by two local schools – Somerleyton Primary and Bramfield House – asking if they might visit as an enhancement for their arts curriculum programme. The children really enjoyed the experience. Somerleyton pupils did some quick sketching facilitated by Grace Adam and the older students from Bramfield House engaged animatedly with their teachers and Cindy over their interactions with many of the works on display. 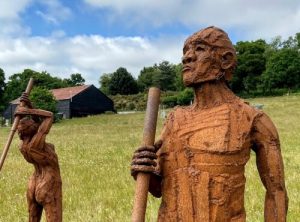 The end of trail ceilidh with Syzewell Gap and Jon Hooton was a lovely way to bring SitV to a close. Everyone enjoyed the music, dancing and chat and Simon anounced the winner of the public’s vote for most popular artwork – Standing for Something in a Changing World by Tobias Ford. He also announced the names of those who received in excess of 100 votes for their work – Meg Amsden, Mike Challis, Harry Chrystall, Cindy Lee Wright and Nick Ball. What is particularly pleasing is the fact that everyone received several votes and that all of the arts genres and aesthetics were well represented in terms of public support.

Sculpture in the Valley depends on a huge amount of individual effort and energy. First and foremost by the exhibiting artists whose work we display and without whom there would be no trail. Also for their preparedness to give us at least a day of their time on reception – as did a number of non-artist WBA volunteers. Then, behind the scenes to a large extent, the SitV team of Netta Swallow (volunteers rota organiser), Ann Follows (health & safety and general admin), Cindy Lee Wright (sales and other documentation as well as curation), Grace Adam (lead curator and guided walks) and Simon Raven (site manager and curation). Netta, Ann, Cindy and Simon also took on supervisory duties at reception.

Special thanks also to Brian Guthrie and Spadge Hopkins for stepping into the breach on more than one occasion when we were short on reception staffing and to Jade Nice (our website and marketing manager). And finally, our thanks to John and Priscilla Westgarth for hosting us once again in the beautiful setting of Potton Hall.