You are here: Home / SEA STORIES 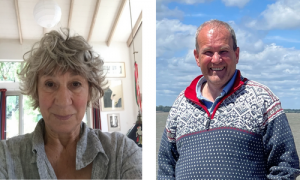 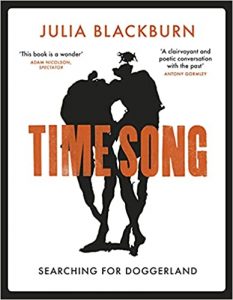 Julia Blackburn is the acclaimed author of some 20 books, on subjects as diverse as Napoleon, her family, Billie Holiday and mermaids. Time Song : Searching for Doggerland is Julia Blackburn’s personal journey by way of history, stories and song through this lost land off our coast. The book has been widely praised, shortlisted for the Wainwright prize, and is now published in paperback.

‘A poetic and fascinating exploration of life on Doggerland… This is one of the only books I’ve ever read that has made me feel better about climate change.’ Olivia Laing, Guardian book of the week. 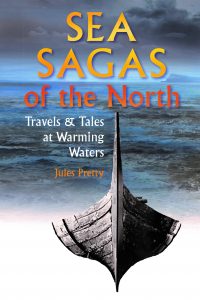 Jules Pretty is Professor of Environment and Society at Exeter
University and a widely published author. His new book is Sea Sagas of the North: Travels and Tales at Warming Waters. It interweaves prose chapters and alliterative sagas. It tells of Norse and Anglo-Saxon gods, Viking expansion, historic travel to Denmark and Lindisfarne…

‘An astonishing achievement…  The crackle of language, the word play, the strange music of unfamiliar words. Magnificent.’ Richard Mabey

Jules Pretty’s book concludes with the drowning of Doggerland, so the two authors will have much to talk about.

Julia herself has recently published The Wren, a short series of personal prose poems, also her first major book since Time Songs–Dreaming the Karoo. It is about her journey to South Africa in search of the lost people called the /Xam. It is a haunting book about the brutality of colonial frontiers and the fate of the dispossessed.

…she works a miracle… dead people talk in a dead language, describing a culture and way of life which is also dead and yet thanks to… Blackburn’s tactful, beautifully-framed extrapolations, those dead come before us and speak. Lucy Hughes-Hallett, New Statesman

The event will be chaired by Dan Franklin, whose authors when publishing director of Jonathan Cape included Ian McEwan, Martin Amis, Julian Barnes – and Julia Blackburn. He has recently co-edited the anthology A New Suffolk Garland.

These books will be on sale at the event, thanks to Waveney & Blyth Arts’ Two Rivers partner, the Halesworth bookshop.