You are here: Home / Activities / Walks

Each year we organise a programme of guided walks that highlight a particular part of our patch and celebrate connections with creative people from the past or present day – or provide an opportunity to be creative ‘en route’. The walks are led by artists, writers, historians, ecologist, volunteers and local people with a passion for place.

The extraordinary creative richness of this area is reflected in the fact that since 2011 over seventy five unique walks have taken place – each one focused on different creative connections. 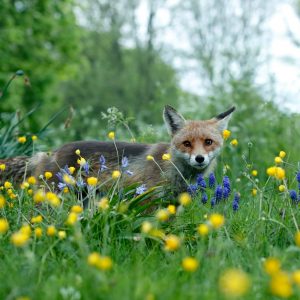 Wild About Bungay with Terry and Chris Reeve

This walk, based on the book Wild About Bungay, commemorated Jasmine Lingwood, a keen nature lover, who re-established the Bungay branch of Suffolk Wildlife Trust in 2004. The book features approx. 250 colour photos of all aspects of Bungay wildlife, by local contributors, featured on the Wild About Bungay website.

More on this walk soon.

Walking Right up your Street with Dean Parkin

From the Town Hall, we walked down the famous Lowestoft Scores, starting at Mariner’s Score. These scores are narrow alleys that connect the town built on the cliff top, to the former fishing village down by the shore, known as The Grit. The Scores were lined by small terraced houses, tiny one or two up and downs which Dean explained, would have been occupied by as many as thirteen children or two families in each.

Stopping periodically to show us original photos and quotes from people who lived and worked in The Grit, we were able to imagine what hard work it would have been. We saw the site of the former school, shops and pubs. The church, Christchurch is still standing and used for worship – it’s a place where fishermen lost at sea are still remembered. Dean explained that there was a great sense of community, sharing the hardships and joys of living there in the well-formed close fishing community.

One of the people who worked in The Grit was Dean’s Dad – Dean explained that his father made plastic ducks in a former net store close to where we were standing. Dean’s Dad’s Ducks was one of the first shows Dean performed, it was at Edinburgh Festival years ago but here was Dean on this rainy walking day reaching into his bag and to our amusement pulled out one such plastic duck!

The combination of personal anecdote, real stories of hardship and daily life in the fishing community whilst stopping to look closely at the architecture, gave us all an insight to the time and feel of the past. The Grit was a world of its own, extensive and active but which surprising to know, was bulldozed and cleared within Dean’s lifetime. Good to see that there is healthy regeneration today. The group finished the walk standing next to a restaurant about to open in the former Blue Anchor pub, then we visited to the newly opened independent bookshop Paperworks Books & Prints. 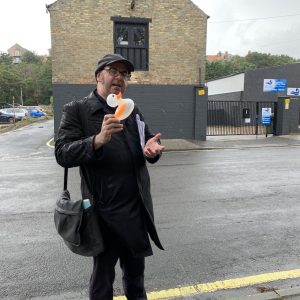 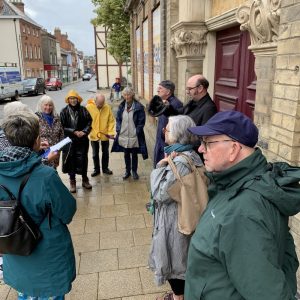 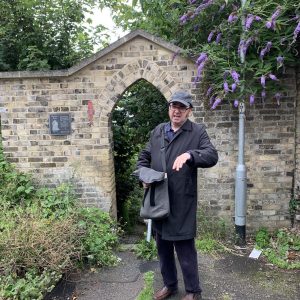 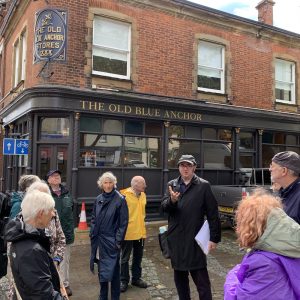 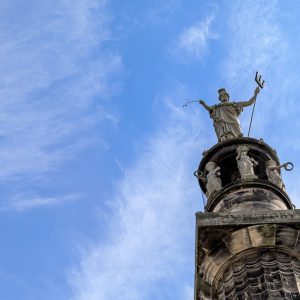 The group of thirteen met in the loft at Mark’s Victorian former fishing warehouse on the headland between Yarmouth’s harbour and the beach. The area appears disused, derelict and lacking a sense of community but this hides the very vibrant history which in many ways remains just below the surface. Mark himself is dedicated to ensuring this history is not lost, being an expert on the nineteenth century photographer Peter Henry Emerson, and having lived and worked in the area for a long time. Mark enthusiastically revealed his knowledge and commitment to the area. Whilst he was talking to us, we had a reminder of the industrial life that is still very present because right next to Mark’s warehouse is a metal galvanising plant from which there was a constant rumble as a fork lift truck moved metal stock from yard to lorry/lorry to yard. 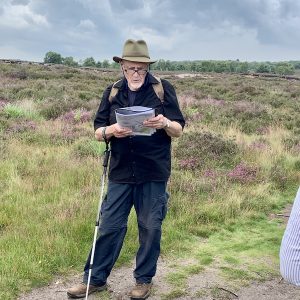 On 9 July Ivor and Jean Murrell led a group of eleven on the Savour the Sandlings walk.

hs around Dunwich forest stopping at the Potton Hall café for refreshments.

Along the route Ivor stopped at various points to show sites of special interest.

On Westleton Common the cobble stones worn to a smooth round by the movement of ice age glaciers.

Besides this site were Silver studded blue butterflies, bee orchids and beautiful clumps of heather in full flower.