Yes there will be a time when we can run events, open galleries and studios, join walks and workshops. Until then – let’s remind ourselves of some of the amazing activities that W&BA has created over the last ten years.

What better way to start than Finding Paradise. Devised by Simon Raven this trail of artworks, each portraying a letter from the word Paradise, was laid out along the two river valleys in 2015. It celebrated the landscape of the Waveney and Blyth valleys and the creative work of some of our members.

Let’s reprieve the Paradise Pilgrim who set out that summer to find the letters hosted by arts venues. Here are some extracts from the slightly tongue-in-cheek diary:

One August day I set off in pursuit of capital A. This required Paradise Pilgrim to leave the gentle headwaters of the Waveney and, like an otter in search of new territory, head cross country through villages such as Metfield and Linstead. In less than an hour I arrived in Halesworth to start my search. The Cut, Halesworth’s arts centre and theatre, is welcoming all sorts of boffins on the day I arrive. Part of its science café season, the foyer is full of displays about antibiotics, soil, compost and the value of eating broccoli. Having tried broccoli soup, explored renewable energy options and tasted tea and carrot cake, I finally tracked down capital A and was told that I was not the first person to come looking. You could say that by now ‘I was hooked’. 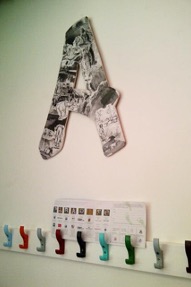 Figure 1 Capital A at The Cut

After successfully tracking down the E, I could no longer be chasing the tail of paradise but set off in search of dragons. As dragons begin with D and so does Diss, it was a simple decision to find Designer Makers in the Heritage Triangle, as this part of Diss has become known. Stepping across the threshold, there were old friends from Diss Corn Hall and, as in all good quests, a guide came to our aid – print maker Annette Rolston. Annette showed us round the tardis like interior. There were necklaces, knitted goods, stained glass, mosaics, prints, finely crafted clothes and willow baskets. It was a true emporium of artistic talent. The whole concept of Designer Makers is that not only do people work together, making unique and beautiful objects, but the public can come and buy direct from the makers and see how the pieces are made.

But what about the dragon? It truly epitomises the spirit of Designer Makers; several of the artists contributed to its design and construction and there it was, coiled, sleeping, suspended on a wall. 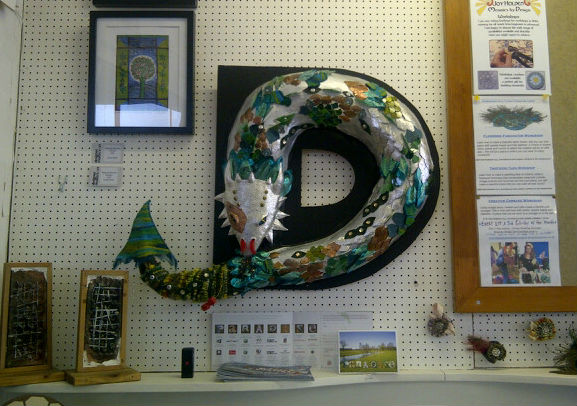 I am nearing the halfway mark on the Paradise Trail which takes me away from our market towns to a village easily bypassed on the A143 – Brockdish. I am killing two birds with one stone for not only is Brockdish playing host to Paradise ‘I’, it is the venue for August’s Arts and Eats. The Old Kings Head, a fourteenth century pub at the centre of the village, was bought last year by brother and sister, Jonathan Townley and Louise Lees. After complete refurbishment it now offers not only the traditional bar and restaurant but a café serving cakes and cappuccino – always a hit with Paradise Pilgrim, who has been known to navigate the county on the basis of the best coffee shops. Joined by Jonathan’s wife Vicky, an art teacher, the pub now offers an art gallery and a venue for some creative activities.

It was not difficult to locate I, startling, vivid, well-padded and set amongst paintings, not too far from the cakes! 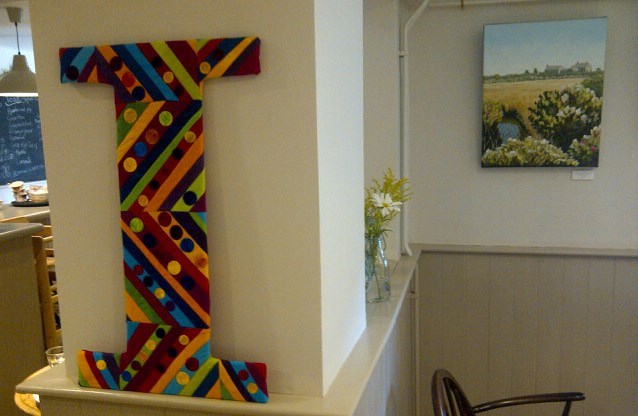 Figure 3 I in The Kings Head, Brockdish

I found an opportunity to track down P in Bungay. It was the Doggerland workshop – Words on the Edge – that lured me this far along the Waveney. Venturing further down this valley into the little market town, home of the Fisher Theatre, I indeed felt like a fisherman. I was hoping to catch P hooked up in the Gallery upstairs or hanging above the coffee machine. Imagine Pilgrim’s own slough of despond on discovering that the theatre is closed on Sundays. The P went unstamped.

And now comes the sad conclusion – I can see no way down the Waveney and Blyth rivers before the trail ends on 30th September (2015). Paradise Pilgrim has therefore drawn the search to a close and admits to only collecting an IDEA of PARADISE.

Figure 4 Only an Idea of Paradise

But for all pilgrims there remains one opportunity to see all the letters in a row. They are on display in the bar of the Swan Hotel, Harleston.

A          Members of Inspired by Becker Art Society, Wenhaston